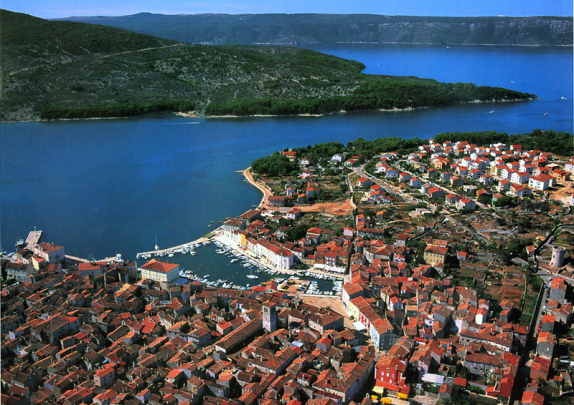 The city of Cres is situated on the north-east part of a big and well protected bay, very close to the marina ACI of Cres. On both sides of the bay there are great beaches. The harbour is very well protected from all kinds of winds, but the winds bora and scirocco are still felt.
You can enter the Cres harbour through a 400m wide channel. For a good orientation, it is necessary to watch the lights situated on the peaks Kovačine (white) and Križice (green). It is best to navigate in the middle of the channel, in order to avoid the shallow water that is to be found up to 100m from the coast. After the entrance into the channel, you can see a lighthouse, on the peak Melin (red). There is a rock under water and you must keep at least a distance of 50m from it. The speed inside the canal is limited to 5 knots.
At the northern part there is the marina ACI Cres and on the eastern part there is the city harbour wich consists of three parts. At the external part there is the main 50m long     that looks toward north and a 60m long shore. It is best if you dock on the other part of the shore that is closed by two malls that overlook one another. It is possible to dock or anchor in front of them and the water here is app. 5m deep. The bottom is          . The part behind the malls and the third part of the harbour that is made of a small mandrać are reserved for the boats of the inhabitants. It is also possible to dock on the shore that looks towards the shipyard in the direction SE. This is also the best protection from the waves caused by bora and scirocco.

MCP boat charter is delivering chartered boats to a desired location for you.